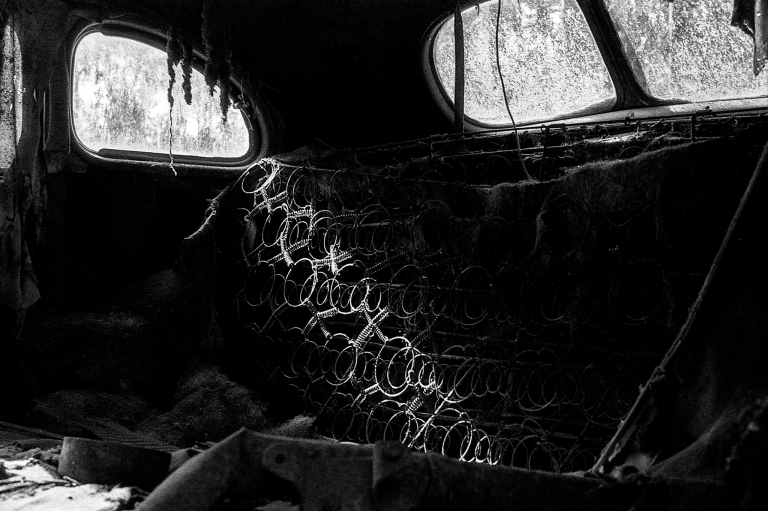 Every weekend I pick up my dad, his name is John, from the retirement home a little south of my place. He loved to walk. We go to a different neighborhood each time. Last Saturday we were walking by an old salvage yard. He saw a car and just stopped. His face went blank for a moment. He went through the gate around to the car. He opened the door and looked at the back seat. I was calling him to come back but he just stood there. I went in then to try to get him back outside. As I approached I could see him deep in thought. His eyes were wet. I tried to touch his elbow to lead him back. He would not move. “I will never forget that night, I was going to Korea in a couple of days. It was the last time we would see each other till I came back. We were so crazy in love but getting married was the last thing we thought about. She was so independent, she wanted to be a ‘free woman’”. He was talking about my mom. She died 5 years ago. When she left us he no longer cared about keeping the house up. He sold it and moved into the place he is at now. “I had borrowed my dad’s car and we were going to the movies and dinner. We never made it to the movies. We drove down the highway a bit and pulled over. We wrote monthly while I was away. She never told me about you. She was then living in an apartment with a friend of hers. When I came home and saw her there at the bus depot waiting for me my heart stopped. She was so beautiful. It was then that I saw a small boy tugging at her skirt. I was curious of course and asked who he was? ‘I brought him to meet his father today’, she told me. I looked around and realized what she had said. You mean? ‘Yes, she said, the backseat’”.  I knew that my dad and mom were married a few years after I was born but not the details. We got back into the car after our walk. He did not talk as we drove back to his home. He got out of the car and looked at me and ‘winked’. He displayed a smile I had not seen for a few years. The last time I saw that smile was the last time I saw them together.

2 Replies to “The BACKSEAT”